Ron English (born 1966) is an American contemporary artist who explores brand imagery and advertising. Born in Dallas, Texas, he is known for the use of color and comic book collage. His official website.Career

One of the most prolific and recognizable artists alive today, Ron English has bombed the global landscape with unforgettable images, on the street, in museums, in movies, books and television. English coined the term POPaganda to describe his signature mash-up of high and low cultural touchstones, from superhero mythology to totems of art history, populated with his vast and constantly growing arsenal of original characters, including MC Supersized, the obese fast-food mascot featured in the hit movie “Supersize Me,” and Abraham Obama, the fusion of America’s 16th and 44th Presidents, an image widely discussed in the media as directly impacting the 2008 election. Other characters carousing through English’s art, in paintings, billboards, and sculpture include three-eyed rabbits, udderly delicious cowgirls and grinning skulls, blending stunning visuals with the bitingly humorous undertones of America’s Premier Pop Iconoclast. English was one of the on-camera subjects interviewed for the documentary Super Size Me (2004), which showcased his McDonald’s-themed artwork — inspired by English’s belief about the effect of fast food franchises and restaurant chains on the American culture.

“Abraham Obama” Abraham Obama during the 2008 US Presidential Election is a significant creation made with a “portrait-fusion” of the America’s 16th and 44th Presidents.

English has also painted several album covers including The Dandy Warhols album cover Welcome to the Monkey House and the cover of the 2010 album Slash. He later painted the Chris Brown album cover for F.A.M.E. Some of his paintings were used in the Morgan Spurlock documentaries Super Size Me and POM Wonderful Presents: The Greatest Movie Ever Sold. Following the credits, he receives special thanks and is credited as “The Greatest Living Artist.”

English is the subject of a Pedro Carvajal documentary entitled Popaganda, named after one of his art books. He is also a subject of “The Art Army” action figures by Michael Leavitt.

English and his fellow artists Shepard Fairey, Kenny Scharf and Robbie Conal guest-starred on the March 4, 2012, episode of the television program The Simpsons, “Exit Through the Kwik-E-Mart”.

English has initiated and participated in illegal public art campaigns since the early eighties. Some of his extralegal murals include one on the Berlin Wall’s Checkpoint Charlie in 1989 and one on the Palestinian separation wall in the West Bank in 2007, with fellow street artists Banksy and Swoon (artist).

Culture jamming is one aspect of English’s work. Although never an official member, Ron joined forces with the Billboard Liberation Front on several occasions. The B.L.F. practices culture jamming by altering billboards by changing key words to radically alter the message, often to an anti-corporate message. Frequent targets of Ron’s work include Joe Camel, McDonald’s, and Mickey Mouse. Ron English can be considered the “celebrated prankster father of dollar-pop”, who wrangles carefully created corporate, and are used against the very corporation they are meant to 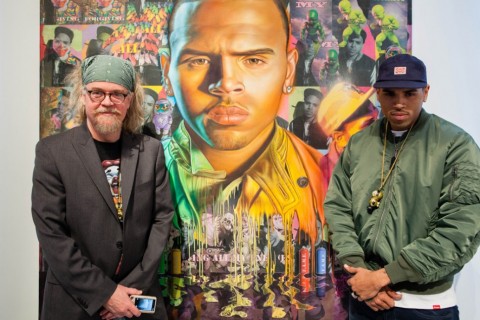 represent. He is also widely considered a seminal figure in the advancement of modern contemporary art from traditional wild-style lettering and into clever statement and masterful contemporary art.

During the 2008 Presidential Election, he combined the features of Barack Obama and Abraham Lincoln for a distributed image entitled “Abraham Obama”. He created an oil painting, which was photographed to produce a print. The “Abraham Obama” print was sold to raise funds for and promote the Obama campaign. 200 prints were created.[citation needed] “Abraham Obama” was also used in a series of street murals installed in Boston, San Francisco, Los Angeles, Seattle and Denver. The image was shown on television and in newspapers and magazines in countries including Argentina, Brazil, Britain, France, Poland, and Iran. The mural consisted of the image, repeated in rainbow effect color combinations of 14 panels, each 12 by 6 foot. Portions of the celebratory video of Will.i.am’s “It’s a New Day” were filmed in front of the LA Abraham Obama mural.

Ron’s culture jamming technique forces the consumers of the world to take a harder look at corporation-dominated society. Ron does this by using his over emphasized, grotesque, and to some, offensive, characters to intrigue the consumer, luring them in to reveal the truth behind the product.

Recently Ron has refocused his culture jamming attention from billboards to another form of advertising; product packaging. Ron recreates several different packaging platforms from cereal boxes, to milk carton, to cigarette packs, to reveal truth in advertising. After designing the packaging English and his Team POPaganda infiltrate different retailers around the country and “shop gift”, leaving consumers to consume the uncomfortable truth behind the products they intend to purchase. Some of Ron’s most popular product packaging designs include, “Cap’n Corn Starch”, “Duncan High Hash Brownies” and “Camel Kool’s” THC Enriched Tobacco Cigarettes.

English is a fine art painter specializing in oils. After receiving his MFA from The University of Texas he relocated to New York City and apprenticed with several artists, gradually beginning to sell his own work. His dominant style is characterized by extreme photo realism, striking use of secondary color and appropriation of pop imagery. He is considered by many to be one of the more skilled renderers of his generation. Frequent themes are revisiting and reworking childhood from the vantage point of adult skill as well as examining the darker meanings behind garish pop surface imagery. English also tends to use historical imagery as a template to explore universal issues. Frequently he reworks such images as The Last Supper, Starry Night, and Picasso’s Guernica.

English has appropriated many well known images and characters from pop culture, reworking them into his own signature images. Some of these include a reworking of Charlie Browninto his “Grin” character and one of his famous “MC Supersized” based on the idea that Ronald McDonald ate his own product. Another signature image of the idealized American female is his image of Marilyn Monroe with Mickey Mouse breasts. 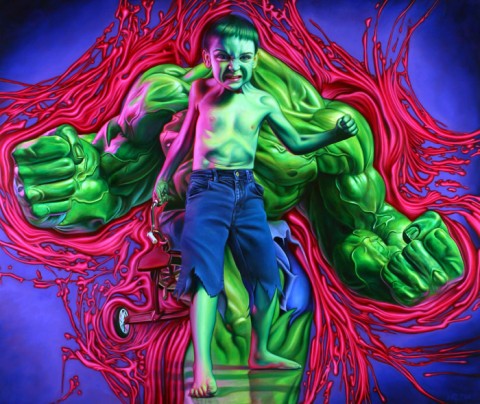 In 2006, English exhibited “Grade School Guernica”, one of his versions of Picasso’s “Guernica“, at the Station Museum of Contemporary Art in Houston. The painting depicts the scene acted out by his children viewed from the point of view of the bomber airplane. “Grade School Guernica” explores the nature of violence, from schoolyard play to global carnage, as it comments on the embedding of propaganda into cultural references largely taken for granted.[citation needed]

“Lazarus Rising” was English’s first exhibit in the UK, at Elms Lesters Painting Rooms in London. The show featured a comic book collage and oil on canvas pieces, where if you looked carefully, you would trace the genesis of the characters and follow the arc of their inner life.[citation needed]

His exhibition “Season In Supurbia” took place in 2009 at the Corey Helford Gallery in Culver City.

“POPagandastan” was exhibited in 2013, also at the Corey Helford Gallery.

In 2005 English began creating designer toy versions of his iconic creatures and has been producing these collectables ever since. English has produced over 50 different designer toys since his first in 2005. Ron English has become a leading member of the designer vinyl toy movement.

English has also collaborated with other artists to produce toys. In 2013, he teamed up with SLASH to create a limited edition fiberglass bust of the now iconic image used for the SLASH & FRIENDS album artwork.

In 2013, Ron also collaborated with rock band Pearl Jam to produce “Falla Sheep”, a blind box line-up featuring 7 color variants of 3.5″ sheep in wolves’ clothing toys, which were distributed through stores and also sold at shows during Pearl Jam’s 2013 tour.