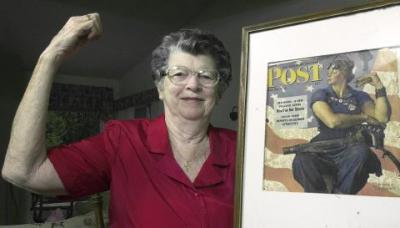 FILE – In this May 22, 2002 file photo, Mary Doyle Keefe poses at her home in Nashua, N.H., with the May 29, 1943, cover of the Saturday Evening Post for which she had modeled as “Rosie the Riveter” in a Norman Rockwell painting. Keefe died Tuesday, April 21, 2015, in Simsbury, Conn., after a brief illness. She was 92. (AP Photo/Jim Cole, File) (Jim Cole/AP)Mary Doyle Keefe, the model for Norman Rockwell’s iconic 1943 Rosie the Riveter painting that symbolized the millions of American women who went to work on the home front during World War II, has died. She was 92.Keefe died Tuesday in Simsbury, Connecticut, after a brief illness, said her daughter, Mary Ellen Keefe.

Keefe grew up in Arlington, Vermont, where she met Rockwell — who lived in West Arlington — and posed for his painting when she was a 19-year-old telephone operator. The painting was on the cover of the Saturday Evening Post on May 29, 1943.

Although Keefe was petite, Rockwell’s Rosie the Riveter had large arms, hands and shoulders. The painting shows the red-haired Rosie in blue jean work overalls sitting down, with a sandwich in her left hand, her right arm atop a lunchbox with the name “Rosie” on it, a rivet gun on her lap and her feet resting on a copy of Adolf Hitler’s manifesto “Mein Kampf.” The entire background is a waving American flag.

Rockwell wanted Rosie to show strength and modeled her body on Michelangelo’s Isaiah, which is on the ceiling of the Sistine Chapel.

Keefe, who never riveted herself, was paid $5 for each of two mornings she posed for Rockwell and his photographer, Gene Pelham, whose pictures Rockwell used when he painted.

“You sit there and he takes all these pictures,” Keefe told The Associated Press in 2002. “They called me again to come back because he wanted me in a blue shirt and asked if I could wear penny loafers.”

Twenty-four years after she posed, Rockwell sent her a letter calling her the most beautiful woman he’d ever seen and apologizing for the hefty body in the painting. 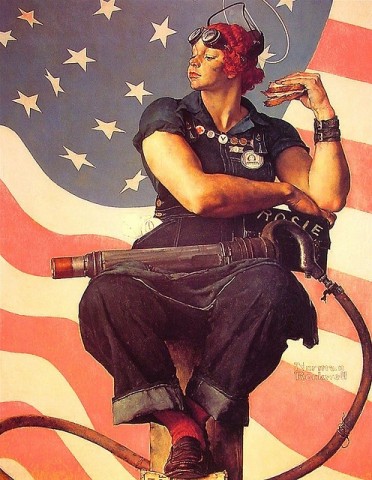 “I did have to make you into a sort of a giant,” he wrote.

The Rosie painting — not to be confused with a poster by a Pittsburgh artist depicting a woman flexing her arm under the words “We Can Do It” — would later be used in a nationwide effort to sell war bonds.

Keefe said people in Arlington didn’t make too much of a fuss about her being in the Rosie painting, aside from teasing her a little about Rosie’s big arms.

“People didn’t make a big deal about things back then,” she told the AP.

The painting is now part of the permanent collection at the Crystal Bridges Museum of American Art in Bentonville, Arkansas.

Keefe spent the last eight years in a retirement community in Simsbury, according to an obituary prepared by her family.

She graduated from Temple University with a degree in dental hygiene, and was working as a dental hygienist in Bennington, Vermont, when she met her husband of 55 years, Robert Keefe, who died in 2003. They had four children and lived in Whitman, Massachusetts, and later in Nashua, New Hampshire.

Keefe’s family will receive friends and take part in a memorial Mass on Friday at McLean Village in Simsbury. A graveside service is scheduled for Saturday at Park Lawn Cemetery in Bennington.

modelrockwellvermontwe can do it
The Drawing Center's 2015–2016 Exhibition Schedule
World Art Day: April 15