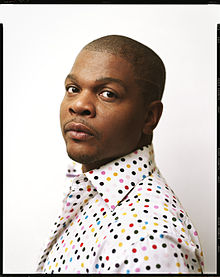 Kehinde Wiley (born 1977) is a New York-based portrait painter, who is known for his highly naturalistic paintings of people with brown skin in heroic poses. He will often use old masters paintings for the pose of the figure.

Kehinde Wiley was born in Los Angeles, California in 1977. His father is Yoruba from Nigeria, and his mother is African-American. As a child, his mother supported his interest in art and enrolled him in after school art classes. At the age of 12, he spent a short time at an art school in Russia. Wiley did not grow up with his father, and at the age of 20 he traveled to Nigeria to explore his roots and meet him.

He earned his BFA from the San Francisco Art Institute in 1999 and his MFA from Yale University, School of Art in 2001.

Wiley’s painting style has been compared to that of such traditional portraitists as Reynolds, Gainsborough, Titian and Ingres. The Columbus Museum of Art, which hosted an exhibition of his work in 2007, describes his work with the following: “Kehinde 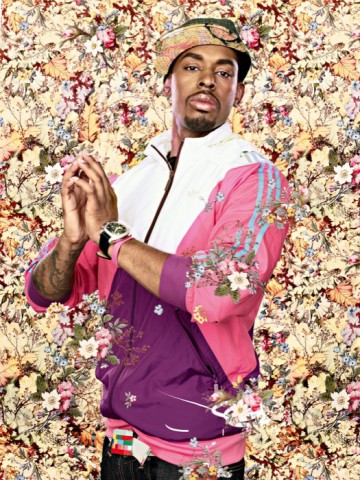 Wiley has gained recent acclaim for his heroic portraits which address the image and status of young African-American men in contemporary culture.”

Wiley’s paintings often blur the boundaries between traditional and contemporary modes of representation. Rendered in a realistic mode–while making references to specific Old Masterpaintings–Wiley creates a fusion of period styles, ranging from French Rococo, Islamic architecture and West African textile design to urban hip hop and the “Sea Foam Green” of a Martha Stewart Interiors color swatch. Wiley’s slightly larger than life size figures are depicted in a heroic manner, as their poses connote power and spiritual awakening. Wiley’s portrayal of masculinity is filtered through these poses of power and spirituality.

Wiley’s Napoleon Leading the Army over the Alps (2005) is based on Napoleon Crossing the Alps (1800) by Jacques-Louis David, often regarded as a “masterpiece”, now restaged by Wiley with an African rider wearing modern army fatigues and a bandanna. Wiley “investigates the perception of blackness and creates a contemporary hybrid Olympus in which tradition is invested with a new street credibility”.

His portraits are based on photographs of young men who Wiley sees on the street. He painted men from Harlem’s 125th Street, then South Central neighborhood where he was born. Dressed in street clothes, his models were asked to assume poses from the paintings of Renaissance masters, such as Tiziano Vecellio and Giovanni Battista Tiepolo. 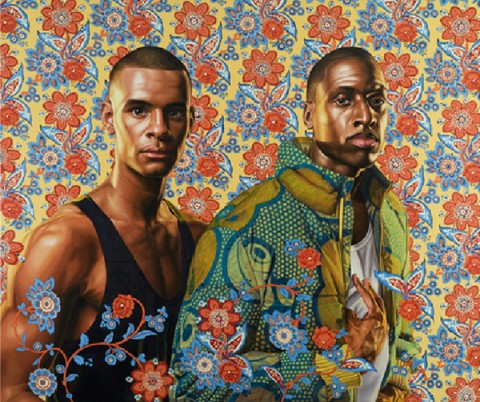 The artist describes his approach as “interrogating the notion of the master painter, at once critical and complicit.” Wiley’s figurative paintings “quote historical sources and position young black men within that field of power.” In this manner, Wiley’s paintings fuse history and style in a unique and contemporary manner.