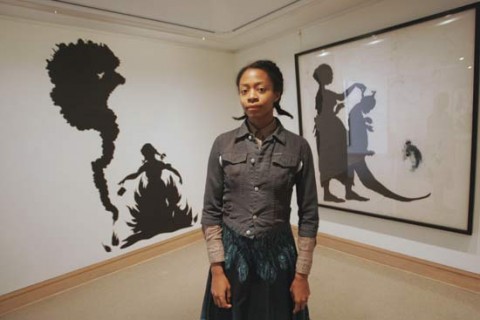 Kara Walker (born November 26, 1969) is a contemporary African-American artist who explores race, gender, sexuality, violence and identity in her work. She is best known for her room-size of black cut-paper silhouettes. Walker lives in New York and is on the faculty of the MFA program at Columbia University. Personal website.

Walker was born in Stockton, California in 1969. Her retired father, Larry Walker, is a formally educated artist, a professor, and an administrator. Her mother worked as an administrative assistant.

“One of my earliest memories involves sitting on my dad’s lap in his studio in the garage of our house and watching him draw. I remember thinking: ‘I want to do that, too,’ and I pretty much decided then and there at age 2½ or 3 that I was an artist just like Dad.” —Kara Walker

Kara Walker moved to her father’s native Georgia at the age of 13 when he accepted a position at Georgia State University. She received her BFA from the Atlanta College of Art in 1991 and her MFA from the Rhode Island School of Design in 1994. Walker first came to art world attention in 1994 with her mural Gone, An Historical Romance of a Civil War as It Occurred Between the Dusky Thighs of One Young Negress and Her Heart. This unusual cut-paper silhouette mural, presenting an old-timey south filled with sex and slavery was an instant hit. At the age of 27 she became the second youngest recipient of the coveted John D. and Catherine T. MacArthur Foundation’s “genius” grant, second only to renowned Mayanist David Stuart. In 2007 Walker Art Center exhibition Kara Walker: My Complement, My Oppressor, My Enemy, My Love was the artist’s first full-scale U.S. museum survey. Walker currently lives in New York, where she has been a professor of visual arts in the MFA program at Columbia University since 2001. Influences include Andy Warhol, with his omnivorous eye and moral distance; and Robert Colescott, who inserted cartoonish Dixie sharecroppers into his version of Vincent van Gogh’s Dutch peasant cottages. Walker was afraid to address race during college and didn’t start inviting this topic into her art until attending Rhode island School of Design for her masters. There was a distinct worry that having race be the nucleus of Walker’s content, it would be received as “typical” or “obvious”to address the elephant in the room.In an article in the Boston

Globe written by Edgar Allen Beem it’s described that not only did Walker’s families move down south in her youth contribute to her later work , because she saw intense discrimination, but also Kara’s personal relationships.Walker’s interracial relationship ended up being to an extent traumatic thus resulting in her feeling even more like the “other”. Kara’s sexual relationships with white men that left her with a feeling of disconnect with herself are also part of what charges the sexual content in her silhouettes. America is only about 200 years old yet slavery was in north America for over 245 years, and yet is swept under the rug, because it’s uncomfortable. Kara Walker is disinterested about the readers discomfort regarding the art, in fact Walker feels it’s a necessity. The art itself depicts a larger theme of what humans are capable of. It’s recognition of how humans can and have treated one another and exposes the darkest side of human behavior.”The tone of Walker’s art offers up for critique, the problem of the broader culture’s inability to come to terms with the past”

Beginning with Gone: An Historical Romance of Civil War as it Occurred Between the Dusky Thighs of a Young Negress and Her Heart (1994), Walker became known for her panoramic friezes of cut-paper silhouettes, usually black figures against a white wall, which address the history of American slavery and racism through violent and unsettling imagery. Walker has produced works in ochre gouaches, video animation, shadow puppets, and “magic-lantern” projections, as well as a number of black-paper silhouettes, perhaps her most recognizable works to date.

Walker’s silhouette images work to bridge unfinished folklore in the Antebellum South, raising identity and gender issues for African American women in particular. However, because of her confrontational approach to the topic, Walker’s artwork is reminiscent of Andy Warhol’s Pop Art during the 1960s (indeed, Walker says she adored Warhol growing up as a child). Her nightmarish yet fantastical images incorporate a cinematic feel. Walker uses images from historical textbooks to show how African American slaves were depicted during Antebellum South. Some of her images are grotesque, for example, in The Battle of Atlanta, a white man, presumably a Southern soldier, is raping a black girl while her brother watches in shock, a white child is about to insert his sword into a nearly-lynched black woman’s vagina, and a male black slave rains tears all over an 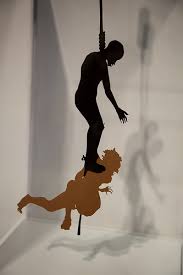 adolescent white boy.Through the use of physical stereotypes, such as flatter profiles,bigger lips,straighter nose , longer hair, help the viewer immediately distinguish the “negroes” from the “whities”. It is blatantly clear in her artwork who is in power and who is the victim to the people with power. There is a hierarchy in America relating to race and gender with white males at the top and women of color (specifically black) at the bottom. Kara depicts the inequalities and mistreatment of African Americans by their white counterparts.Viewers at the Studio Museum in Harlem looked sickly, shocked, and some appealed upon seeing her exhibition.However this is nothing new for her art often receives such reactions.Thelma , the museum’s chief curator said : ” Throughout her career, Kara has challenged and changed the way we look at and understand American history. her work is provocative and emotionally wrenching, yet overwhelmingly beautiful and intellectually compelling.”

Walker debuted a public exhibition at the The Drawing Center in New York City in 1994. Her installation Gone: An Historical Romance of a Civil War as it Occurred between the Dusky Thighs of One Young Negress and Her Heart “polarized the New York art world”.[10]

In response to Hurricane Katrina, Walker created “After the Deluge,” since the hurricane had devastated many poor and black areas of New Orleans. Walker was bombarded with news images of “black corporeality,” including fatalities from the hurricane reduced to bodies and nothing more. She likened these casualties to African slaves piled onto ships for the Middle Passage, the Atlantic crossing to America.

In February 2009, Walker was included in the inaugural exhibition of Sacramouche Gallery, “The Practice of Joy Before Death; It Just Wouldn’t Be a Party Without You.” Recent works by Kara Walker include Frum Grace, Miss Pipi’s Blue Tale (April–June 2011) at Lehmann Maupin, in collaboration with Sikkema Jenkins & Co. A concurrent exhibition, Dust Jackets for the Niggerati- and Supporting Dissertations, Drawings submitted ruefully by Dr. Kara E. Walker, opened at Sikkema Jenkins on the same day.

In 2005, The New School unveiled Walker’s first public art installation, a site-specific mural titled Event Horizon and placed along a grand stairway leading from the main lobby to a major public program space.

In May 2014, Walker debuted her first sculpture, a monumental piece entitled A Subtlety, or the Marvelous Sugar Baby, an Homage to the unpaid and overworked Artisans who have refined our Sweet tastes from the cane fields to the Kitchens of the New World on the Occasion of the demolition of the Domino Sugar Refining Plant. The massive work was installed in the disused Domino Sugar Refinery in Brooklyn and commissioned by Creative Time. The exhibition consisted of a giant female sphinx, measuring approximately 80-feet long by 40-feet high, and several li 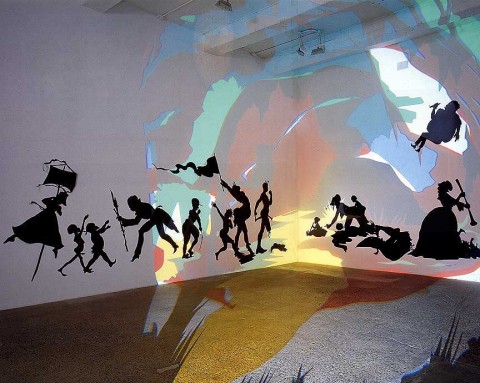 fe-size child-like figures, dubbed attendants. The sphinx was made by covering a polystyrene core with machine-cut blocks of white sugar, which were then further cut by hand and smoothed with a sugar slurry. Domino donated 80 tons of sugar for Walker’s piece. The smaller figures were cast from boiled sugar (similar to hard candy) and had a dark amber or black coloring. The attendants were modelled after some figurines that Walker had purchased on Amazon.com. After the exhibition closes in July, the refinery will be demolished as had been planned before the show.

For the season 1998/1999 in the Vienna State Opera Kara Walker designed a large scale picture (176 m2) as part of the exhibition series “Safety Curtain”, conceived by museum in progress. In 2009, Walker curated volume 11 of Merge Records’, Score!. Invited by fellow artist Mark Bradford in 2010 to develop a set of free lesson plans for K-12 teachers at the J. Paul Getty Museum, Walker offered a lesson that had students collaborating on a story by exchanging text messages.

The Detroit Institute of Art removed her The Means to an End: A Shadow Drama in Five Acts (1995) from a 1999 exhibition “Where the Girls Are: Prints by Women from the DIA’s Collection” when African-American artists and collectors protested its presence. The five-panel silhouette of an antebellum plantation scene was in the permanent collection and was to be re-exhibited at some point according to a DIA spokesperson.

A Walker piece entitled The moral arc of history ideally bends towards justice but just as soon as not curves back around toward barbarism, sadism, and unrestrained chaos caused a controversy among employees at Newark Public Library who questioned in appropriateness for the reading room where it was hung. The piece was covered but not removed in December 2012. After some discussion among employees and trustees the work was again revealed. Kara Walker visited the New Jersey Newark Public Library to discuss the work and the controversy that went with it. Walker did not stray away from the difficult subjects such as race and history. The artist Betye Saar thinks Kara’s work is “revolting and negative and a form of betrayal to the slaves..[and] basically for the amusement and investment of the White art establishment.” Saar voiced this on the PBS documentary I’ll Make Me a World in 1999. In the summer of 1997 Saar emailed 200 fellow artists, and politicians to warn and voice her dislike 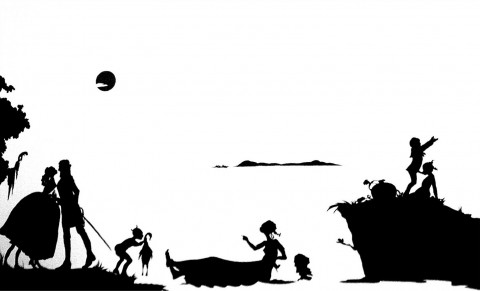 and negative opinion about Kara Walker’s work. When depicting such a vile time in history, especially the way in which Walker has, there is no escaping negative reception.

Some of Walker’s exhibitions have been shown at The Apartheid Museum in Johannesburg, The Renaissance Society in Chicago, the Museum of Modern Art in New York, the San Francisco Museum of Modern Art, the Modern Art Museum of Fort Worth, and the Museum of Contemporary Art in Chicago, and the Art Institute of Chicago. In 2002 she was chosen to represent the United States in the São Paulo Biennial in Brazil. Walker’s first museum survey, in 2007, was organized by Philippe Vergne for the Walker Art Center in Minneapolisand traveled to the Whitney Museum in New York and several other cities.