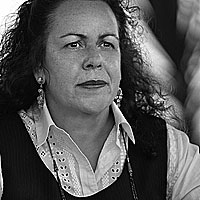 She studied at the Sydney College of the Arts. She has travelled as an artist internationally and to remote communities in Northern Territory. In particular visits to Ramingining inspired an awakening to culture and a conscious commitment to living on her own land in Badtjala. She helped establish the Boomalli Aboriginal Arts Cooperative in Sydney along with a group of prominent and politically active Aboriginal artists.

Foley uses her art to explore the tensions between sex, race and history and their various constructions.

Foley’s work refers to her unique life history as an indigenous woman growing up in regional Queensland, in a community
with a living memory of their colonisation by the English. Foley’s discourse of history and culture is personal as it has impacted on her family, community and remains central to her sense of identity.

For Foley however, the political and the personal are not separate entities. Her lifestyle and art both reflect a commitment to her Aboriginal identity and challenge Australian culture to reread history to reveal moments of strength and empowerment.

In 2000, Foley’s work was amongst that of eight individual and collaborative groups of Indigenous Australian artists shown in the prestigious Nicholas Hall at the Hermitage Museum in Russia. The exhibition received a positive reception from Russian critics, one of whom wrote:

This is an exhibition of contemporary art, not in the sense that it was done recently, but in that it is cased in the mentality, technology and philosophy of radical art of the most recent times. No one, other than the Aborigines of Australia, has succeeded in exhibiting such art at the Hermitage. 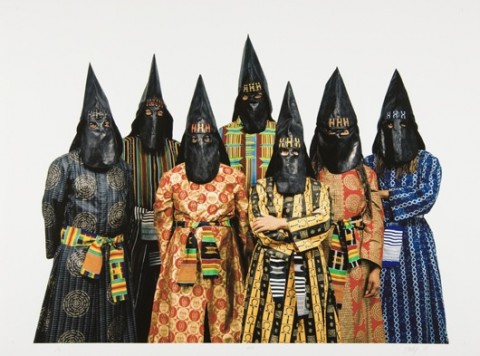 Race relations, female sexuality and the history of opium in Queensland are among the issues tackled head on by the UQ Art Museum’s latest exhibition.

Fiona Foley: Forbidden opens on February 19 and is the first survey of one of Australia’s most prominent contemporary Indigenous artists.

One of the founding members of Boomalli Aboriginal Artists’ Co-operative in 1987, Ms Foley has produced major public artworks, sculpture, photographs, artist prints, paintings and installations that have attracted national attention and respect.

“Fiona Foley is a Brisbane-based artist who is well known for the tough stance she takes on Indigenous history, but in her art she takes the phrase ‘less is more’ to heart, sometimes adding a sharp edge of humour,” UQ Art Museum Director Nick Mitzevich said.

The exhibition is presented in partnership with the Museum of Contemporary Art in Sydney (MCA), and tracks the artist’s work over the past 15 years.

The survey coincides with Ms Foley’s recent completion of major public art commissions in Mackay and at the State Library of Queensland, the latter referring to the Aboriginals Protection and Restriction of the Sale of Opium Act of 1897.

“What I am trying to talk about is a notion of truth,” Ms Foley said.

“I suppose my reputation has preceded me, because when I see something that doesn’t sit well, I always question it.”

Ms Foley is of the Wondunna clan of the Badtjala people from the Hervey Bay region, with much of her work motivated by the systematic dispossession of Indigenous people in Queensland at the turn of the twentieth century.

Key photographic suites include Native Blood and Badtjala Woman (1994), which feature the artist restaging the poses and attire associated with nineteenth century ethnographic photography, and a recent work inspired in part by the 2005 Cronulla race riots, Nulla 4 eva (2009).

“Foley’s HHH series, for instance, presents a confronting inversion of the KKK (Ku Klux Klan) and was made when the artist was in New York in 2004,” Mr Mitzevich said.

“The photographs depict African-Americans glaring at the camera, each cloaked in a black hood emblazoned with the initials HHH â€“ Hedonistic Honky Haters â€“ their gowns made of wonderfully colourful Dutch-wax cloth that celebrates their African heritage.”

Her recent film Bliss (2006) also features as does the photographic suite Wild Times Call (2001), created with the Seminole community in Florida, which is ambitiously installed within a sea of corn at the UQ Art Museum.

Fiona Foley: Forbidden also includes the artist’s significant installation Land Deal (1995) from the collection of the National Gallery of Australia.

Land Deal comprises a large spiral of flour upon the gallery floor and related objects which refer to John Batman’s “exchange” of items to the Wurundjeri people of Victoria in 1835 in return for the land upon which the city of Melbourne now stands.

The exhibition proved popular at the MCA over summer, with more than 70,000 visitors. Fiona Foley: Forbiddenis open free to the public, seven days a week, until May 2.

This project has received financial assistance from the Queensland Government through Arts Queensland.