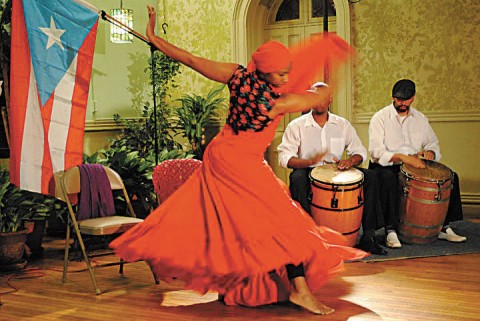 Bomba is one of the traditional musical styles of Puerto Rico. It is the mixture of the three different cultures of the Island, the Spanish, African and Taino cultures. The base rhythm is played by two or more drums. While bomba can be used as the generic name for a number of rhythms, its real meaning is about the encounter and creative relationship between dancers, percussionists, and singers. Bomba is a communal activity that still thrives in its traditional centers of Loíza, Santurce, Mayagüez, Ponce, and New York City.

Bomba is described to be a challenge/connection between the drummer and the dancer.The dancer produces a series of gestures to which the primo o subidor drummer provides a synchronized beat. Thus, it is the drummer who attempts to follow the dancer, and not the more traditional form of the dancer following the drummer. The dancer must b
e in great physical shape, and the challenge usually continues until either the dancer or the drummer discontinues.

Bomba also is composed by three or more singers and a solo singer, the singing has a dynamic similar to those of “Son” where the lead singer sings a chorus and the other respond, and in between choruses the lead singer will improvise a verse. The theme of most Bomba songs is every day life and activity, Like the case of a certain song called “Palo e Bandera” that talks about a love triangle between a female dancer, a female singer and the singer’s husband the “Primo” player. The wife realizes her husband is cheating on her with the dancer and decides to teach her a lesson on the dancefloor (Also called Batey, which means front yard).

This particular style of music originated in Mayagüez, Puerto Rico amongst the slaves who worked the sugar cane fields. These slaves came from different regions of Africa so they could not easily communicate with each other but they found common ground in music. As opposed to the Blues in the United States, Bomba was not a form to express the sadness or the troubles of their life but a way to escape from those problems. With the migration of these slaves to different regions of the island Bomba was practiced in different regions of the island each giving their personal twist to Bomba music, for example in the region of Ponce they play with larger drums than other regions that are played by placing the drum completely horizontal. After a few years songwriter Rafael Cortijo introduced Bomba to the Concert Halls by arranging it with brass instruments and more simple rhythm patterns, today Bomba can be found anywhere on the island and in fusion with different styles like Jazz or Salsa music.

It consists of drums called barriles or bombas (made from barrels of rum, one named buleador and another primo or subidor), cuá (two sticks that were originally banged on the side of the barril) and a maraca.  Dance is an integral part of the music: The drum called “Primo” replicates every single move of the dancer, this is called “Repique”. Although the origins are a little scarce it’s easy to spot the elegance and poise of the Spanish Flamenco and the energy and soul of African dances.

The traditional drums used in bomba are called barriles, since they have long been built from the wood of barrels. The high pitch drum is called “subidor” (riser) or “primo” (first), and the low pitch drums are called “buleador” and “segundo” (second). Not less important are the “Cuás” that are two wooden sticks banged on a wooden surface and a large Maraca that keeps time.

There are several styles of bomba, and the popularity of these styles varies by region. There are three basic rhythms and many others that are mainly variations of these three, they are: “sica”, “yuba”, and “holandés”.

Today there are various groups playing Bomba both as a traditional style and as a fusion with some other style. The most well-known traditional players are the Cepeda Family who have been playing Bomba for generations and the Ayala family, who are a family with a tradition of arts and crafts as well as Bomba music.[citation needed] Rafael Cortijo took Bomba to the mainstream with his Combo in the 1950s and 1960s. Puerto Rican composer Roberto Angleró wrote 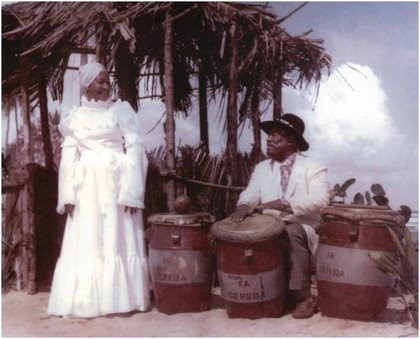 and sang “Si Dios fuera negro” (“If God Was Black”), a huge hit in Puerto Rico, Peru and Colombia during the early 1980s.[citation needed] Rubén Blades made a cover version of it once; the song was even translated to French and became a minor hit in Martinique. Some of the local musicians who also play this style are Yuba Iré, Paracumé, Bomba Siglo XXI, among others.

In California it has been popularized at by Maestros de Bomba en la Bahía at La Peña Cultural Center.