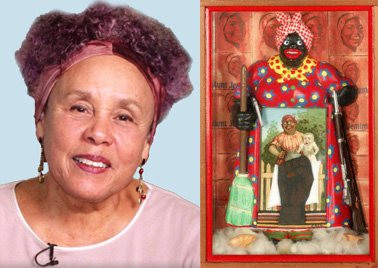 Betye Irene Saar (born July 30, 1926 in Los Angeles, California) is an American artist, known for her work in the field of assemblage. Saar was a part of the black arts movement in the 1970s, challenging myths and stereotypes. In the 1990s, her work was politicized while she continued to challenge the negative ideas of African-Americans. One of her better-known and controversial pieces is titled “The Liberation of Aunt Jemima.” It is a “mammy” doll carrying a broom in one hand and a shotgun in the other, and placed in front of the syrup labels. Her work began with found objects arranged in boxes or windows. The items would reflect her mixed ancestry. 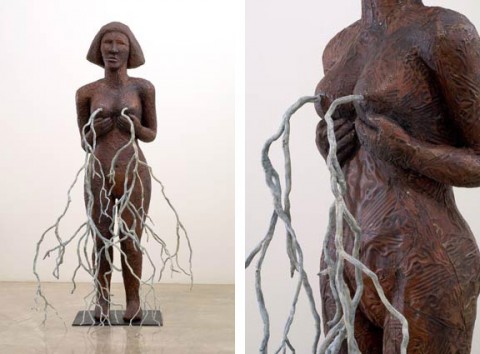 After graduating in 1949, Saar worked as a social worker in addition to pursuing her interest in art. A partnership with enamel jewelry artist Curtis Tann brought Saar into Tann’s circle of black artist friends and patrons. In the course of their business they also entered state fairs and community art competitions, one of which led to Saar meeting her future husband, Richard Saar, whom she married in 1952. Shortly thereafter, she quit her job as a social worker and set up a small home studio, creating enamel jewelry and designing greeting cards. During this period she gave birth to two children, Lezley Sarr in 1953 and Alison Saar in 1956. (Both children grew up to be artists in their own right.) Saar began her graduate education in 1958, originally working towards a career in teaching. However, a printmaking class she took as an elective changed the direction of her artistic interests. Saar credits printmaking as her “segue from design into fine arts.” 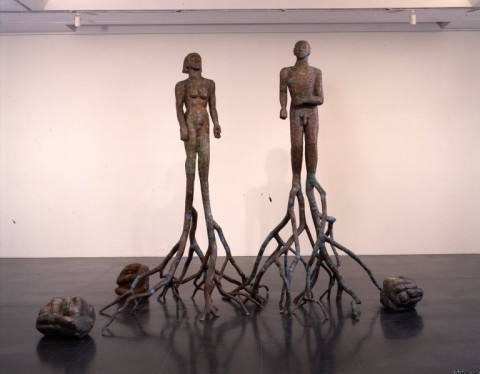 Her interest in assemblage was inspired by a 1967 exhibition by Joseph Cornell, though she also cites the influence of Simon Rodia’s Watts Towers, which she witnessed being built in her childhood. She began creating work typically consisting of found objects arranged within boxes or windows, with items drawing on various cultures reflecting Saar’s own mixed ancestry: African-American, Irish, and Native American.

In the late 1960s, Saar began collecting images of Aunt Jemima, Uncle Tom, Little Black Sambo, and other stereotyped African-American figures from folk culture and advertising. She incorporated them into collages and assemblages, transforming them into statements of political and social protest. In the 1970s Saar shifted focus again, exploring ritual and tribal objects from Africa as well as items from African-American folk traditions. In new boxed assemblages, she combined shamanistic tribal fetishes with images and objects intended to evoke the magical and the mystical.

When her great-aunt died, Saar became immersed in family memorabilia and began making more personal and intimate assemblages that incorporated nostalgic mementos of her great-aunt’s life. She arranged old photographs, letters, lockets, dried flowers, and handkerchiefs in shrinelike boxes to suggest memory, loss, and the passage of time.

In the early 1980s, Saar taught in Los Angeles at the University of California and the Otis Art Institute now called Otis College of Art and Design. In her own work she began using a larger, room-size scale, creating site-specific installations, including altar-like shrines exploring the relationship between technolo 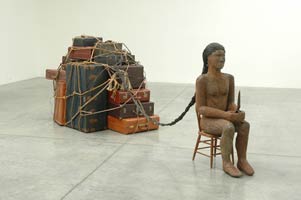 gy and spirituality, and incorporating her interests in mysticism and Voodoo. Pairing computer chips with mystical amulets and charms, these monumental constructions suggested the need for an alliance of both systems of knowledge: the technical and the spiritual.